A Guide to AML and KYC Regulations in Europe 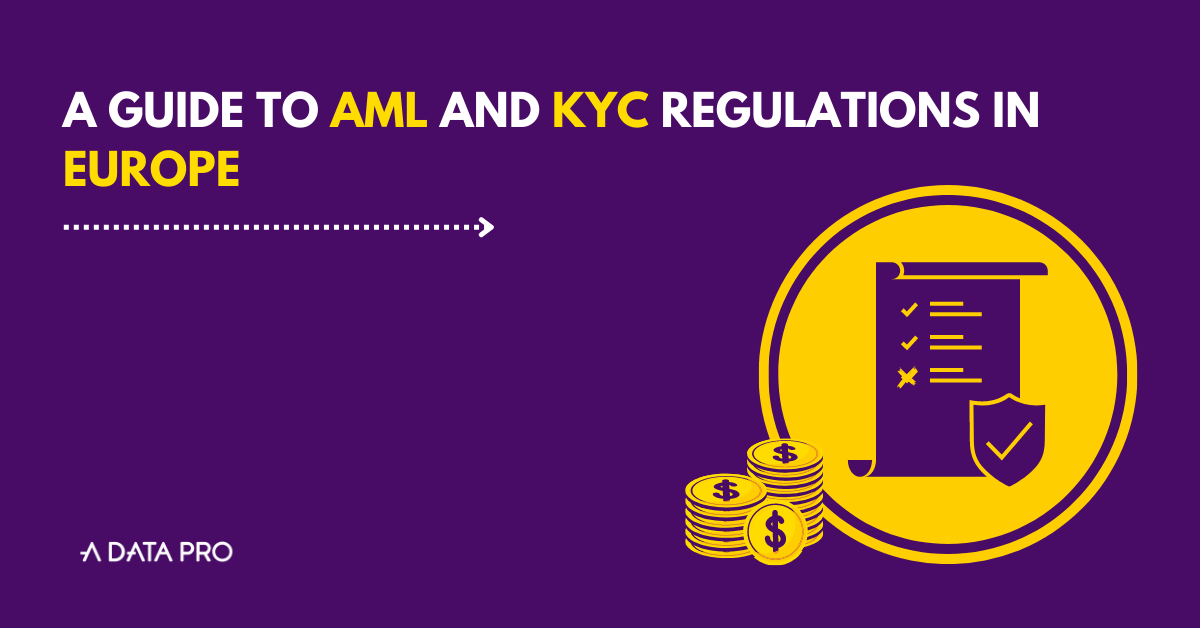 What is the KYC & AML Regulatory Landscape in Europe?

It has been estimated that over $2 trillion is laundered every year around the world, and a sizeable percentage of that is laundered in Europe. France and Germany combined are thought to process over €100 billion in dirty money, roughly half of the amount that’s laundered in the United States.

The problem isn’t going away anytime soon, but there are numerous laws in place to make life harder for criminals.

These Know Your Customer (KYC) and Anti-Money Laundering (AML) regulations are in place across the financial service industry. If you operate a company within this sector, and you want to stay on top of these rules and avoid the regulatory fallout, it’s important to do your due diligence.

What is the Current Landscape?

In the last couple of years, the AML/KYC landscape has changed considerably in the European Union. It has become abundantly clear that the union is rife with money laundering and it’s something that the government has tried to clean up.

The latest changes came courtesy of Directive 2019/1153, which all EU member states were required to adopt by August 2021.

What are the Newest Policies?

Directive (EU) 2019/1153 was first initiated in 2018 and adds to the legal framework concerning money laundering in the European Union. The directive has several aims:

The goal is to enable the free and fast transfer of information between all relevant authorities, thus accelerating money laundering investigations. These investigations can be very prolonged and problematic, and issues are compounded by the involvement of multiple agencies and organisations across 27 different countries.

The aforementioned Directive should eliminate many of the roadblocks that these investigations would otherwise face.

The other directives/regulations that govern money laundering in the EU include:

PSD2 secures electronic payments by requiring customers to undergo Secure Customer Authentication (SCA). This two-factor authentication is now the norm in the EU and applies to all high-risk and high-value payments. It works by
establishing the identity of each consumer and reducing the risk of fraud.

Due diligence is a key part of AML and requires companies to hold a lot of data on customers. GDPR governs the use of that data, ensuring that customer safety and privacy is not sacrificed in the name of AML. One of the rules of GDPR is something known as the Right to be Forgotten, which means customers can request that their

FATF creates the framework for KYC and AML regulations. It includes guidelines relating to due diligence and promotes transparency in the financial services industry.

CDD involves checking blacklists and grey lists for criminal behaviour. These checks should be conducted on all customers and can be performed using publicly available information.

When CDD is not enough, EDD can be performed. This is essential for high-risk customers and requires a more diligent approach, such as investigating the source of funds and monitoring transactions closely. Generally speaking, the company must do all it can to verify the legitimacy of the customer.

In 2022, the EU also announced the creation of a new Anti-Money Laundering Authority (AMLA), one that would oversee FIUs and assist with the launch and implementation of new AML regulations.

Why are These Important?

KYC regulations are used to confirm the identity of an individual while AML laws are designed to reduce money laundering. These laws are important as a lot of the money that’s laundered in the European Union stems from illegal activity, including drug dealing, human trafficking, and black market firearms.

This money could then be used to fund terrorism and the general expansion of criminal enterprises.

AML rules are important in all countries, but even more so in Europe. By virtue of the Schengen Agreement, many European countries have effectively abolished their borders. This makes it easier for criminals to cross national “borders”, taking their money and illegal activities with them.

By adopting directives like those discussed above, the EU is able to give law enforcement the clarity and cohesion they need to operate across member states.

Why is it Important to Keep up with this Information?

Although KYC/AML regulations can be frustrating, time-consuming, and expensive for EU companies to deal with, they are important. Not only do these regulations protect consumers and companies, but they also play a major role in hindering large-scale criminal operations.

On a more immediate level, failure to abide by these regulations could lead to substantial fines and other serious implications. The AMLA has been granted the authority to impose fines of up to €10 million or 10% of annual turnover. These fines vary depending on the nature of the breach, but they can be imposed every single day that the issue is not rectified.

GDPR breaches can also lead to substantial fines, with a cap of €20 million or 4% of global turnover for the previous financial year (whichever is highest). As you can see on this enforcement tracking website, GDPR fines are regularly enforced and are levied across numerous industries.

How to Keep up with this Information

AML/KYC framework is extensive. There are many rules to follow and potential pitfalls to avoid. As a company operating within the European Union, it’s important to stay on top of these to avoid substantial fines and other serious penalties.

That’s where A Data Pro comes in. We provide extensive due diligence reports to help you stay compliant in the face of increasing anti-money laundering and anti-corruption rules. We also check sanctions lists and scan relevant databases for known offenders.

AML is clearly not something that you can afford to take lightly, so get in touch and see what we can do for you.