Winning an EU project is fairly easy, making it a success is a different story 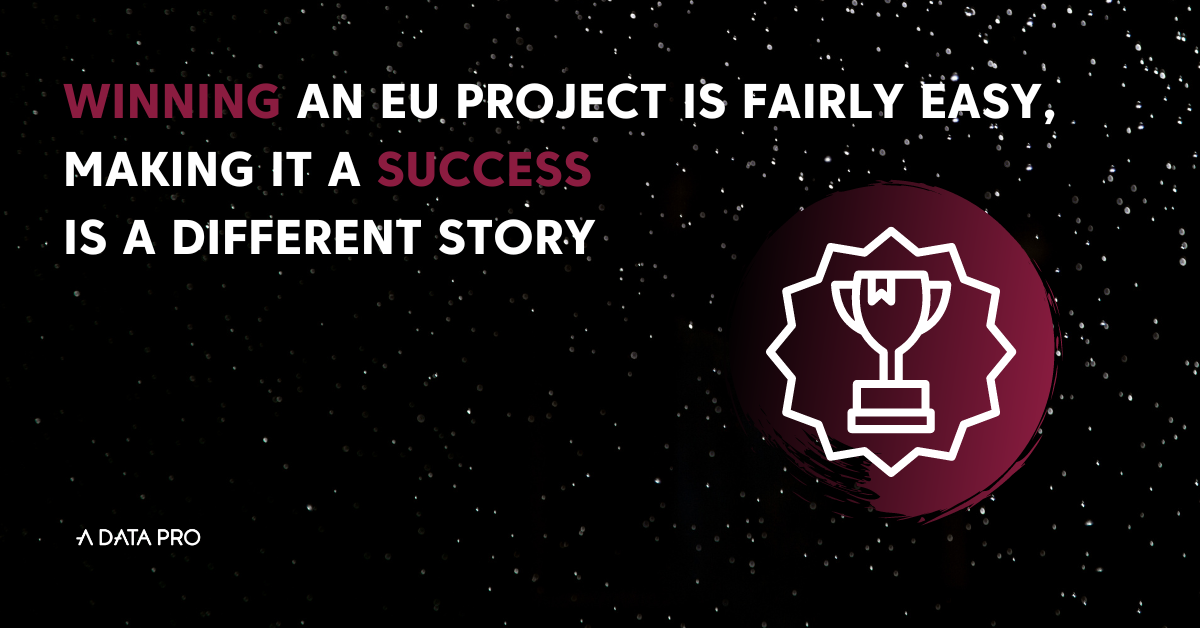 Anton Todorov, head of the Business Development team at A Data Pro, talks about one of his biggest passions – innovation projects under EU programmes.

I didn’t have to think long when I was asked to share some info about our achievements in gaining EU grants and funding for development projects in the last couple of years. Being the narcissist that I am, it is a real pleasure to tell you our team’s success stories since 2008 which had marked the development of A Data Pro.

The first win came in 2008 when our Competence Development & Training project was selected for EU funding by the National Employment Agency. Valued at EUR 130,000 it got EUR 90,000 from the European Social Fund. Imagine our pride of having our first project recognized as being of “strategic importance” for the national economy. We were going crazy and happy, feeling important, considering the benefits the project would bring to the company.

We soon learned that winning a project is…fairly easy and straightforward. Making it a success is a different story.


A few months into the project and we were in a defensive state explaining the benefits, trying to buy-in our fellows and managers to keep working on the project. It was a tough one to manage – involving over 200 trainees in various skills (data management, economics, languages and soft skills), changing curricula and a partner which didn’t understand his role. It was the worst design of a project we could have wished for – hard to implement because of the sheer number of parties involved, hard to maintain because of its duration (18 months), hard to keep afloat because of the hundreds of detailed individual reports that had to be submitted and hard to reimburse because of the ineligibility of the partner.

This experience turned out to be a major advantage and important know-how for our forthcoming applications.

Our next award was a PHARE-funded project introducing the Balanced Scorecard (BSC) approach to strategic company management. Yes, the Kaplan and Norton concept! In the 12 months to November 2009 the company employed consultants and software developers to roll out a BSC-aligned strategy and approach to management, as well as a web-based software platform. The grant was nearly EUR 50,000 (50% of the total costs). More importantly, the project was really challenging and much more rewarding in view of the strategic importance of the decisions, indicators and score-cards that bolstered A Data Pro development for the forthcoming years.

New project funding from the “Development of the Competitiveness of the Bulgarian Economy 2007-2013” operational programme has helped us finance experimental R&D technologies, industrial innovations and technological modernization. Put simply, we became one of the fastest growing R&D SMEs in the region and invested heavily in state-of-the-art technological solutions and systems.

These projects often ranked A Data Pro in the top 10% of all Bulgarian companies which applied for such funding. We achieved an application success rate of over 70% (vs 15-20%, generally considered to be a good benchmark on average) and an execution success rate of 100% (vs 60% on average). The awards were given not only for our craft in proposal writing and understanding of national and European rules and priorities, but because of the potential of the company which A Data Pro happens to be – a reputable, stable and growing business, deserving to be supported as a rising star of the Bulgarian economy.

A few other hits. A social innovations grant helped us introduce additional trainings for our younger employees, bonuses for young parents and even a massage chair and a marquee for our main office in Sofia.

In 2014 we helped the Bulgarian Outsourcing Association win a clustering project and improve the reputation of Bulgaria as a business destination.

What is the next challenge? We’ve made a real headway in the projects we are preparing right now (and will hopefully get awarded in the near future). Stay tuned to learn how we plan to become a factor on the map of global content innovators with artificial intelligence (A.I.), neural networks, linked-data and semantic technologies ahead. And in case you are wondering, our favourite project is called CASPAR, an artificial intelligent content processing system, born from the marriage of ANNITA (artificial neural network) and CASAP (a semantic analysis platform).

We all deserve applause. It was made possible not only by the efforts of our team as project writers and project administrators, but mainly because of the involvement of dedicated project managers and fellows from the company who do their best to execute the projects once they are awarded.

Yep, we love what we do!

Previous Become an intern and join the A team! Next What’s media monitoring got to do with P&G’s “Thank you, Mom” campaign?