Updated: Guide to the Sanctions Imposed on Russia 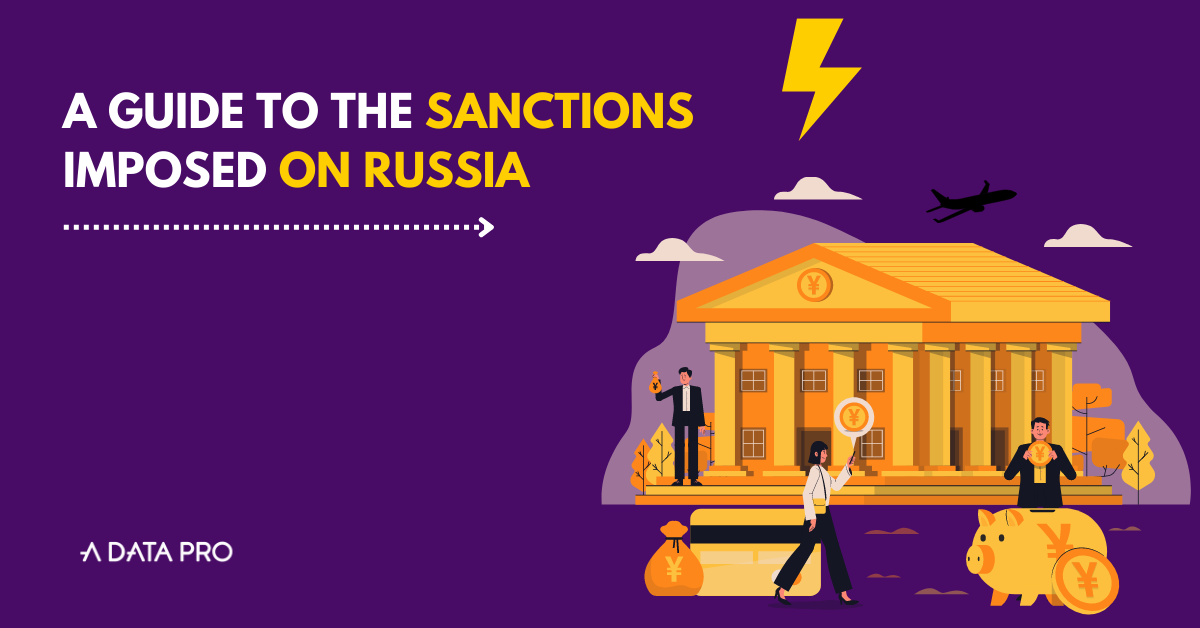 On February 24th, Russia launched a full-scale invasion of Ukraine, signalling a drastic escalation in a conflict that began with the 2014 annexation of Crimea. In the days that followed, Ukrainian President Volodymyr Zelensky imposed martial law, the invasion was almost universally condemned, and NATO began a war of words with President Putin.

In an effort to deter and punish the Russian president, global leaders began a series of sanctions. The United Kingdom, United States, and European Union (EU) led the way in sanctioning the country, with freezes and embargoes placed on Russian products, companies, and its most influential citizens.

Sanctions were also imposed on Belarus. Russia’s neighbour and ally has sent troops into Ukraine and allowed its country to be used as a staging post for the initial invasion.

As sanction lists grow, it becomes more important for companies to stay abreast of these changes and to ensure complete compliance. But what are these sanctions, what kind of effect are they having, and why is sanctions screening so important?

The Russia (Sanctions) (EU Exit) Regulations 2019 act governs all UK sanctions imposed against Russia. As the name suggests, it was created before the 2022 invasion, and as far back as October 2020, it was used to enforce asset freezes and other sanctions on individuals thought to be responsible for the attempted murder of Alexei Navalny (additional sanctions were imposed a year later).

Within the first 30 days of the invasion, the UK announced the following sanctions:

Asset freezes on 386 members of the Russian Duma. Banned the export of luxury goods. Import tariffs on many Russian goods, including vodka.

On May 9th, the UK placed tariffs on the importation of platinum and palladium. Russia is the world’s second-biggest producer of both of these metals, and they account for over £1.4 billion worth of trade between Russia and the UK. In late June, the UK was part of the G7 discussion regarding Russia’s gold revenues, leading to an import ban of all Russian gold.

The most recent sanctions package was revealed on June 29th, with the UK announcing sanctions on Vladimir Potanin, a Kremlin supporter with close ties to Russia.

This was followed by the National Crime Agency issuing a Red Alert Notice on financial sanctions evasion typologies by Russian elites and enablers to monitor sanction implementation.

US Sanctions on Russia

The US imposed sanctions on Russia following the annexation of Crimea in 2014, but these increased significantly in February 2022.

On the day of the invasion, two of Russia’s largest banks (VTB Bank and Sberbank) were cut off from the West and trillions of dollars of Russian assets were frozen.

Since then, the US has announced a number of strict sanctions against Russia, siding with the UK in blocking certain banks and businesses and cutting out Russian vodka and gold.

It also maintains an Entity List that features hundreds of “entities” (individuals, businesses, research institutions, organizations) from both Russia and Belarus.

This list includes entities with direct links to the Kremlin and Putin, including members of Putin’s family. It also includes politicians, generals, and others thought to have been influential in the Russian invasion of Ukraine and the ongoing war.

One of the biggest sanctions against Russia is the SWIFT ban. Initially, several European countries were reluctant to enforce such a ban, but sentiments changed. A number of Russian banks were eventually removed from SWIFT, effectively cutting them off from the international banking system.

The EU has kept pace with the UK and US in sanctioning Russia but energy has proven to be a sticking point. Many European nations are heavily reliant on Russia for gas and oil, and so they expressed doubts about a complete ban.

However, in late May, the EU announced that it would eventually ban all imports of Russian oil.

Other EU sanctions have included: A ban on Russian coal, seafood, wood, cement, and other products (having transition periods) The removal of several Belarussian banks from SWIFT. Restrictions on the availability of “Golden Passports”.

The EU has also sanctioned a number of individuals and entities, and placed broadcasting bans on several Russian media outlets.

Other Countries that Have Imposed Sanctions on Russia

The UK, US, and EU have arguably been the most active in placing sanctions against Russia, but many of their allies have joined them. Here are just a few of the countries to have sanctioned Russia in the last few months:

Conclusion: The Importance of Sanctions Screening

Russia invaded Ukraine less than 5 months ago. In that time, hundreds of individuals and businesses have been sanctioned and Russia has faced serious financial consequences as a result.

Ukraine’s allies are also feeling the effects of these sanctions, as well as the food shortages caused by the war. But with many experts predicting that the war will last for many more months, it’s likely that we’ll see more sanction packages.

In these uncertain times, it’s important to make sure your business is compliant, and that’s why we offer sanction screening services. Our 24/7 monitoring services identify and recognise newly sanctioned entities (as well as changes in existing information) and ensure you are adequately prepared.

We also provide a number of other risk and compliance services, combining data mining, data processing, and data monitoring to ensure all of your compliance needs are met.