The Past, present, and future of media monitoring 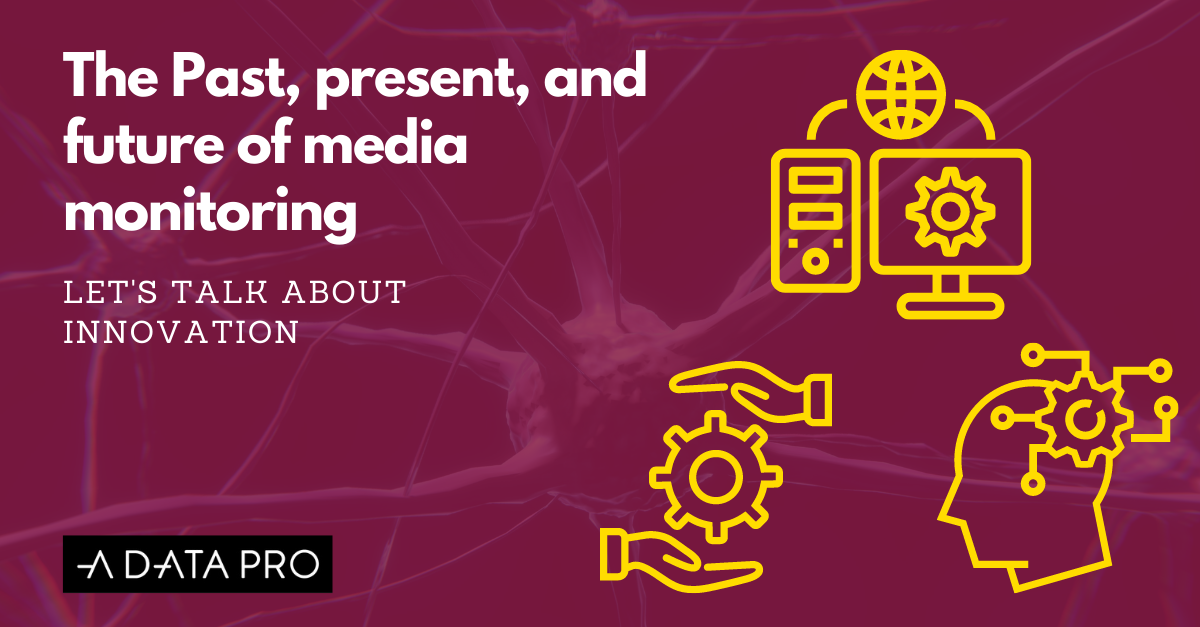 Contrary to popular belief, media monitoring has a long history. While it may sound like a modern service, media monitoring has been around since… well, ever since we had the media. In the 1800s, media was limited to print only. Naturally, monitoring, which back then was called press clipping, also focused on print publications. Back then, people would go thoroughly through newspapers to look for mentions of their names to clip the articles. That is how the first press clipping service was born too. Founded by Henry Romeike, the press clipping agency provided service for famous people who were looking for any mentions of their names in newspapers. After that, more and more agencies developed services.

Of course, with the introduction of the radio and television in the 20th century, the mass media changed, and so did media monitoring. Press clipping agencies started monitoring any mentions of their clients on radio or television programs. As you can imagine, media analysts back then didn’t rely on algorithms. They listened to the radio and watched broadcasts to provide clients with a summary of what was said.

With the development of audio recorders in the 50s and 60s, media monitoring became easier.

The Internet was a major catalyst for a change in almost every business, including media monitoring. The need for more elaborate monitoring tools increased as more and more data emerged. In the current day and age, media monitoring agencies analyze complex variables such as sentiment, the share of voice, interactions, and engagement rate. These variables help the clients understand what and why is said about them online. The knowledge derived from such insights can help companies build marketing or PR strategies, for example.

Another driving factor for a change in media monitoring was social media. Posts, comments, and tweets appear every second, which drove the need for tools that monitor and detect mentions in real-time.

Besides the Internet and social media, another huge factor in modern media monitoring is artificial intelligence. Automatization has become so dominant in media monitoring that it’s quite impossible to perform without it. That is because the number of sources and data published every minute is countless. Companies nowadays don’t have the time to do everything manually. Automatization helps find all the relevant articles on a topic, which means a larger sample for analysis. It does so by integrating Natural Language Processing and machine learning techniques. AI can manage the flow of information and alert if there’s a potential crisis noticed in comments or tweets, for example. The current state of media monitoring is that analysts work with AI to get the best possible results.

The future of media monitoring holds the question of the collaboration between humans and automatization. There are a lot of concerns about whether AI will take jobs in the industry. But industry experts claim that even in the future, elaborate monitoring tasks will be done by people. Even so, there are several obstacles in the future of media monitoring, according to A Data Pro’s Chief Data Officer, Vladimir Petkov.

In a recent interview, he mentioned that one such obstacle is the dispersion of data. Right now, online data is enormous in volume but also comes in various formats and languages. That ultimately makes it more difficult to determine how reliable and impactful every source is.

A Data Pro has all tools that a traditional media monitoring company has, such as platforms for extracting, filtering, and summarizing original data. Besides that, the company has technologies to generate text and automatic reports, through years of research in the field. That’s something that distinguishes the company on a global level.

Another popular tool of the company is measuring the audience’s engagement on specific topics in a given community. That allows for a real-time analysis based on the audience’s interest in media publications, and not subjective preferences. That shows how the monitoring industry is changing towards implementing technology to allow clients to make data-driven decisions.

4 PR success metrics that resonate with the C-Suite

If you have ever tried to explain PR success and value to a C-Suite executive, you know it is not an easy sell. They are used to metrics like revenue and profit, but ...
A Data Pro, C-Suite, PR metrics

As the world becomes more connected and complex, companies are recognizing the need for sustainability. They realise that achieving a balance between economic growth ...
ADataPro, ESG, Media Intelligence

A Data Pro shares with you 6 trends you need to know about PR and communication measurement in 2023. This will help you understand how your campaigns perform and whether your messages are driving behaviours that generate the results you want.
2023, A Data Pro, CommunicationMeasurement, PR, trends