What are KYC and AML Regulations in the UK? 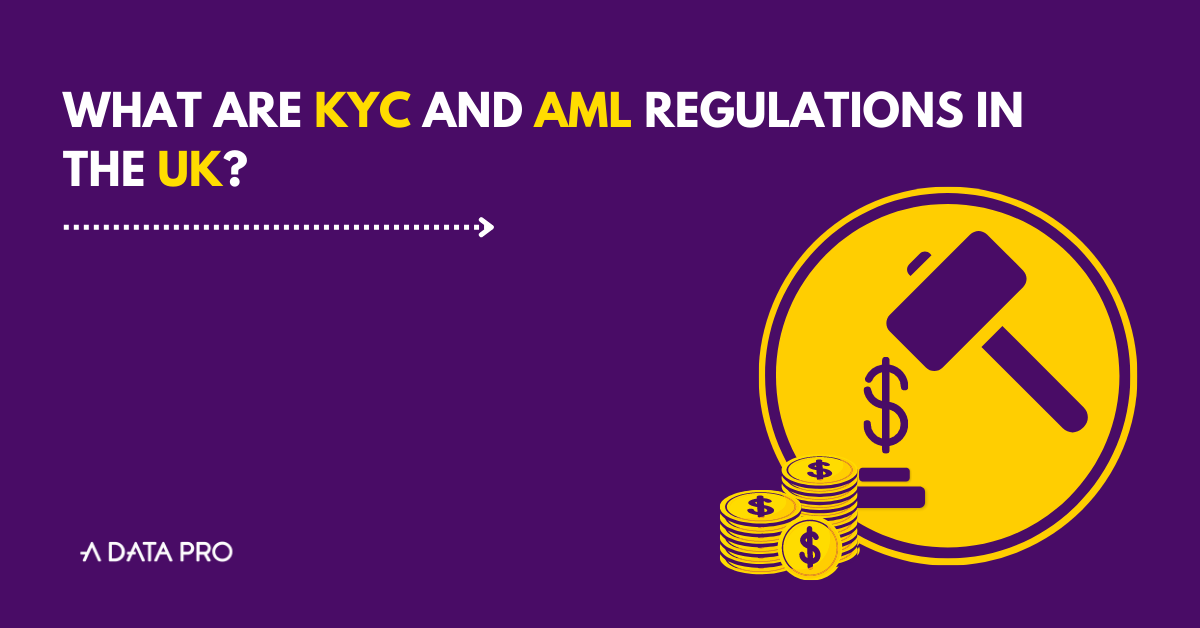 What is the KYC & AML Regulatory Landscape in the UK?

The National Crime Agency (NCA) labels money laundering as a threat to the “UK’s national security, national prosperity and international reputation.” It’s a threat that has become even more apparent following the war in Ukraine, with some MPs arguing that Russian oligarchs have been allowed to use the UK as a “safe deposit box” to fund Putin’s war.

Criticisms aside, the UK government has been doing a lot to combat this problem and there are a number of Anti-Money Laundering (AML) and Know Your Customer (KYC) rules in place.

As a company operating in the UK, it’s important to remain up to date with these changes and ensure your operations are compliant, responsible, and abide by the latest sanctions list.

What is the Current Landscape?

KYC and AML regulations are often discussed in relation to online casinos and sportsbooks. It’s one of the few industries where the consumers know just as much about these regulations as the businesses. After all, they are required to pass verification checks, follow casino rules, and jump through the necessary hoops when they need to withdraw or complete a source of funds request (whereby they are asked to prove they can afford what they are gambling).

KYC is also used to confirm that a gambler is in the United Kingdom, above the legal gambling age, and not on any problem gambling lists.

But these regulations apply across the financial services sector. If your business operates in any of the following industries, you may be expected to abide by AML and KYC laws:

If your business is governed by AML laws, you are required to carry out due diligence to confirm that a customer is who they say they are. This means that you must acquire and confirm a customer’s name, address, and date of birth.

The easiest way to do this is to request a government-issued document (such as a passport), along with a bank statement or utility bill. The former confirms their name and proves that they are in possession of the document. It will also display their biometric data and photograph. The latter proves that they reside at the stated address.

This information can be acquired by conducting a credit check (relying on information gathered and organised by credit reference agencies) and requesting documents directly from the individual.

What are the Newest Policies?

The UK government has adopted an understandably hard-line approach to money laundering and it is constantly seeking new ways to prevent this activity. The last notable changes to these rules occurred in 2020:

A series of additional high-risk factors were added to the list of requirements, with businesses required to perform extra due diligence in various high-risk situations. These include customers who are the beneficiary of a life insurance policy, as well as ones who have been making relevant transactions in high-risk countries.

Firms must report any discrepancies with regard to the information they hold on their accounts and the info that appears on the Companies House Register.

2020 also changed the rules for companies dealing in crypto assets, requiring them to comply with the same AML laws imposed on other financial service companies.

Why are These Important?

KYC and AML laws are important as they help to stem the flow of dirty money that moves through the United Kingdom.

According to a recent report, the UK processes nearly £88 billion in laundered funds every year, second only to the United States. It’s a problem that’s not going away, even with tightening AML/KYC laws. When you consider that laundered money is often used to fund illegal activities (terrorism, trafficking, drugs), it’s a war that’s worth fighting.

In the early days of the internet, consumers were asked for the most basic information before they opened casino accounts, trading accounts, and other online accounts. It exposed these industries to fraud and money laundering and meant that criminals often targeted online services.

But it’s getting increasingly difficult for them to get around AML/KYC regulations and this is mainly down to the work of the government and the firms that follow these rules.

In response to the war in Ukraine, the UK government has also proposed a number of laws concerning foreign-owned property. These laws could grant authorities more control when investigating how these properties are purchased, who owns them, and where the money comes from.

Why is it Important to Keep up with this Information?

A company found to be in breach of AML/KYC regulations could face fines and penalties. Repeat breaches could have serious implications on the future of that business.

In 2019, Standard Chartered Bank was fined over £100 million by the Financial Conduct Authority (FCA) for repeat breaches of AML regulations. These fines were imposed as a result of “serious and sustained shortcomings” in relation to Money Laundering Regulations 2007 (MLRs).

At the time, it was one of the biggest AML fines ever levied in the UK, but just 2 years later, NatWest was fined £264.8 million for three different AML offences. This case also marked the first time that the FCA had pursued criminal charges for AML breaches.

In 2021, the FCA also fined HSBC Holdings PLC and Credit Suisse AG for similar breaches to those outlined above. It marked a record-breaking year for AML fines, and as rules get stricter, we’ll no doubt see many more substantial fines.

How to Keep up with this Information?

As a business operating in the UK, it can be frustrating trying to keep up with the latest AML and KYC regulations. That’s where we come in.

At A Data Pro, we offer a number of due diligence and compliance screening services, as well as those related to sanctions lists and data aggregation.

Our due diligence reports will examine past and current business, taking into account sources of funds, investment activities, sanctions lists, and more to help you meet those demanding and ever-changing regulations.